The husband planned a meticulous trip to 3 different countries in Europe for the nourish—n-cherish household. Left with all the rest of the work, I stood in front of my bookshelf dilly-dallying on the reading material. Finally, I chose Bill Bryson’s Neither Here Nor There: Travels in Europe, which was an excellent read. 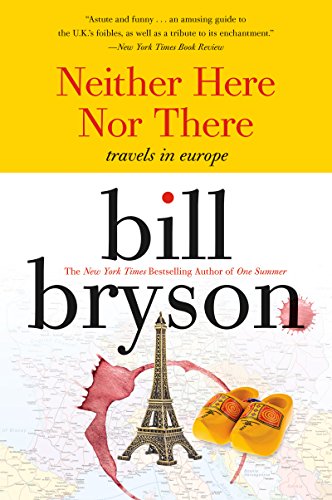 Bill Bryson started off his travels with catching the Northern lights in Norway. We chose France. But believe me, by the time we landed and made our way to the Airbnb , I felt like I was at the North Pole. The high temperatures of the day were 32F or OC. One night while standing by the Seine river watching the Eiffel Tower from a distance, I was so cold, I may have seen the aurora borealis over Jupiter. The daughter’s eyelashes froze, the son with no extra fat reserves froze too. The Seine miraculously flowed on.

Luckily, T’was the most wonderful time of the year!

This feels the time when overuse of the word , “T’was” is a requirement. Europe in Christmas time is a joy. The store fronts in tourist locations have marvelous decorations put up for Christmas and we couldn’t stop admiring the many ways in which people think to spread cheer. It was irresistible to stop and take a few pictures, very well knowing that I may never look at them again. 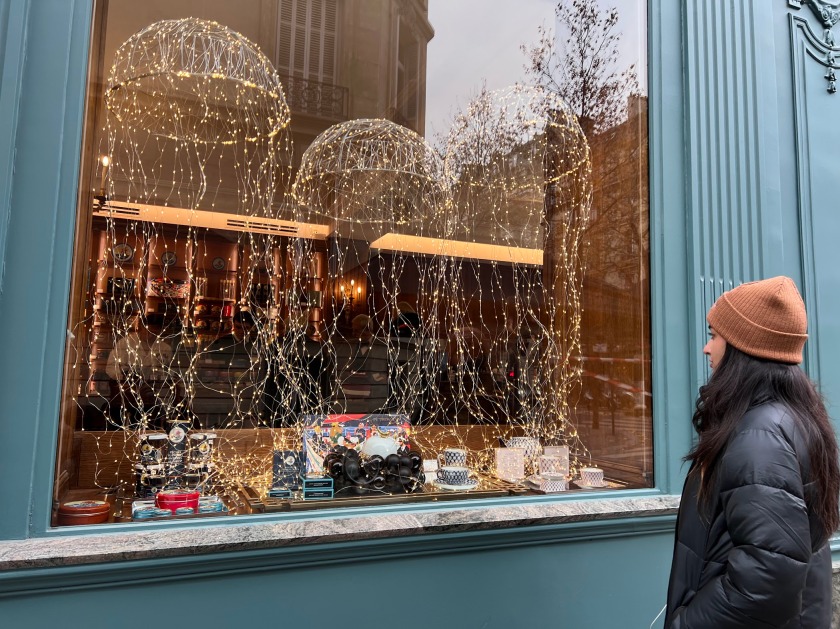 Cities in Europe have a charm to Christmas time that is hard to capture. There is music in the air, there are musicians in subway stations, lights strung up everywhere in artistic and beautiful garlands like little bubbles of joy through the cold winter scene outside. Finally, there is a purposeful stride to people as they walk swiftly in their heavy coats looking sprightly, even though we seemed to feel lumberous with all the layers of thermal wear.

Our warm flight attendant on the KLM flight told us that the Dutch have a word similar to Hygge for this particular feeling:

It is called Gezellig.

She said the word was not easily translated, as it encompasses all warm feelings associated with the yuletide spirit (but is not restricted to Christmas or winter imagery) – just read the link above, will ya?

Every now and then, we would encounter a quiet fascinating residential street with plenty of trees. On one such charming street that windy day, the last few leaves from the trees above floated down and I went chasing after them in glee. No surer way to lift one’s spirits or body temperatures in my books!

The ones who impressed us the most though , were the relentless joggers of Paris. In case, any of you missed the gist thus far – Paris – beautiful but biting cold in winter. Yet, here they were, zipping through the streets in shorts and light jackets. I ain’t going to lie : that takes a special sort of determination and dedication and I would’ve taken my hat off to them if I didn’t think my brain would freeze.

Walking past a little pond that had frozen over, we stopped to watch the ducks standing on the frozen waters. Had their other duck friends flown onto warmer climes in Africa or Argentina, while these poor ducks were stuck here? I thought of that passage by Bill Bryson on his winter trip to Oslo to see the aurora borealis: I suppose this was one of those times when I truly felt grateful to be a visitor and not have to live there. I could already feel my feet freeze through the thick boots, and woollen socks, and couldn’t wait to get back to the room to take a warm shower. How were these poor birds standing on frozen water without socks, coats or caps? Yet, they seemed peaceful enough. They did not seem to be anticipating the World Cup Football Finals match later that evening, they did not seem to think anything of the rain forecast later that night.

“Are you coming or not? Freezing here – let’s get to a warm restaurant for the match!” , said the husband and I hurried along tucking away my little interlude with the ducks of France. It was time to cheer with the people of France for the football World Cup. France Vs Argentina.

After the freezing days of Paris, as we were bundling ourselves up in layers (yet again) for our small foray to find food, I said somewhat severely to the husband. “I think I’ve had enough of European vacations. Next time, we explore other places – Africa, South America, Australia: so many continents to explore! After a few museums, a half a dozen cathedrals, and a few hundred pieces of art, I am done.”

The husband smiled one of his crafty smiles and agreed, for he knew that I will be the one craving a European vacation first. He just had to sit by, observe, and make bets with the children on the timing. Much like watching a football game.

We’d been on a short trip to catch some European magic. We started off in Paris. In order for us to experience a proper European winter, the 1st day in Paris started off with a brisk walk to the Louvre at 8 in the morning when the temperature was still 24F. As we stood there, waiting for the rest of the tour group to join us on the marvelous walking tour through the Louvre, I felt a sudden stab of pity for all those who had lived before our times. 100 BC, 500 AD, 1500 AD, 1700 AD. None of these poor folks had indoor heaters that hummed and thrummed the way the museum indoors sounded welcoming. They didn’t have access to 32°Heat products that were brilliantly designed thermal wear designs – nor were they commonly available after mass production. With three layers of clothing, if it was still this cold, how on this marvelous Earth a mere 100 hundred years ago had people endured this time of the year? The thousands who died in the cold winters in the trenches, on the war fronts, in concentration camps. I shuddered and this time not from the cold.

As I stood there, thinking of the little history I did know, I wondered why we never learnt from them. Why did we not recoil from war, sense divisive forces and squash them? Maybe this humanity’s path – bring ourselves to the brink of annihilation with our madness multiple times over and then miraculously survive till the one time when we don’t. Who knew? Wars and enmity don’t seem to end.

Mercifully, our rag-tag tour group assembled after about 1/2 an hour that felt like 2. We walked into the Louvre like frozen zombies hoping to thaw out with the artworks inside. How did that sculptor bring himself to work on the marble statue of Venus dated 120 BC through these cold winters?

We started off at the famous prism inside where those who read or watched the Da Vinci code. It was beautiful and really, who thought of putting up bean-bags on that pole of the prism? It started the tour of with touch of a whimsy before the academic aspects of the museum unleashed itself.

If I were to describe the Louvre and the Vatican in one stroke of a brush, it would be: Too many artworks to properly appreciate each one.

Though, our tour guide, Maria, tried her best. There were 38,000 pieces of art in there. The Vatican (70,000 of which 20,000 are on display). With all the hundreds of artists at the time, why did only a few achieve lasting fame? Maria explained many things about art that we ought to have known, but didn’t. Things such as  the angle of the light, the imaginative aspects of landscape, the differences in perspective, the kind of face that seemed to have appealed to Leonardo Da Vinci 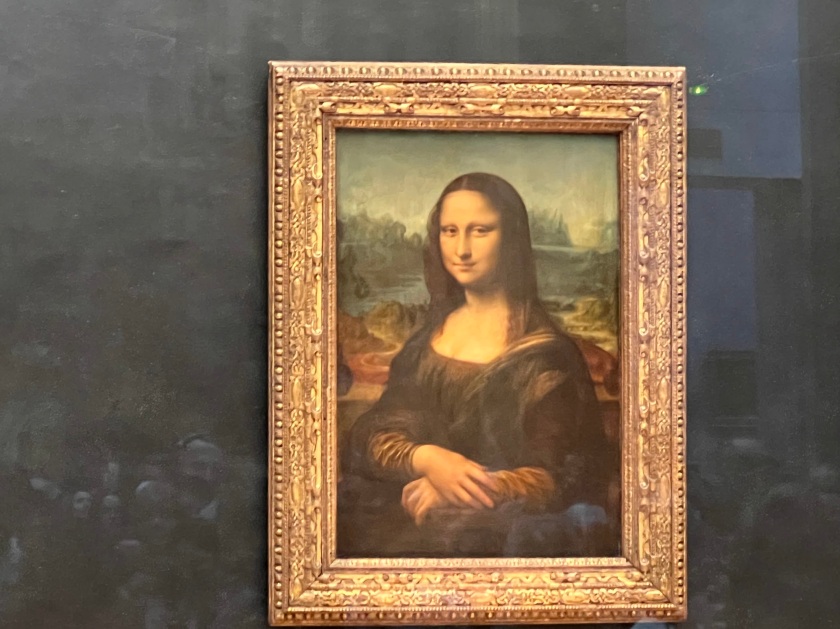 Did that famous, but thoroughly over-rated face of Mona Lisa have a glint of Leonardo Da Vinci’s favorite student? (shown below?)

I keep clicking pictures of the pieces that appealed to me as she gave us salient features. I remember standing in the museum and thinking that I must not let art escape me in the daily humdrum of life. Corporate life, especially, had no time baked in to appreciate the finer aspects of life such as literature, art & music the way schools do. So, how do we make an appreciation of art a daily ritual, so there is always a little of the artistic in us? Oh! So many lofty thoughts. If Leonardo Da Vinci were witness to my thoughts that morning, he might’ve taken me on as a student, grandly overlooking my lack of talent, just for the touching sincerity.

But a mere 48 hours later as I write this, I am distressed to say that I cannot remember why I took half of the pictures I did.

There was something about a picture of the maternal (Maria said Leonardo Da Vinci did not have a mother or someone who set a maternal example in his life, and thus the picture was doubly important). And something appealed to me. But what?

This one appealed to me as a writer. The early journalist who felt he had to say his truth and was murdered for it.

Or the coronation of Napoleon. Here was promise that megalomaniacs existed, continue to exist, and will continue to wreak havoc. In the absence of social media, this was Napolean’s attempt at portraying the coronation to the masses like he wanted – the truth be damned. Hundreds journeyed to the Louvre to get a glimpse of Napoleon and his bride, at the coronation. Apparently, Napolean’s mother did not accept his choice of bride and refused to attend the ceremonies as a result (there is a nice piece of continuity through the ages), but she is there in the painting. The Pope was invited and snubbed, but he looks happy behind the king. Maria pointed out many such discrepancies which I am afraid have evaporated since. Those art aficionados who do know the details have obviously written them out in detail in hundreds of books, blogs and YouTube videos for souls like myself.

And those statues of Venus – already promising womankind with all sorts of torment thanks to the impossible standards of beauty (the tall vertebrae, the perfect ratios between head, legs and girth, that seldom seem to bless breathing and living souls as we live out our lives on Earth.) Did the lovers of the sculptors of Venus feel the pressure, or were simply not bothered about the grandiose perfectionism as they had to tend to the business of living? 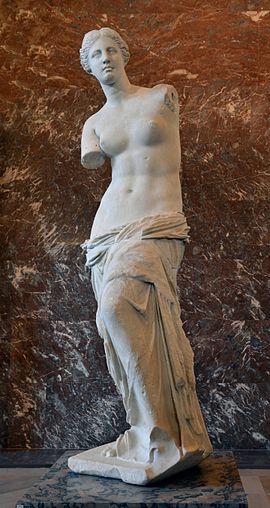 So many inspirational, marvelous wisps floated in at the Louvre. Maybe that is the vibe of museums: the wisps of imagination and insight from the millions of people over hundreds of years all hanging together illuminating the souls who dare to dip their toes into these journeys of the mind.

Our own temple of the minds.